Popular
Should you buy Male UltraCore? – Male UltraCore...
10 Edible Aphrodisiacs and the Science Behind Them
5 Vitamin D-Rich Foods You Should Be Eating...
Why Do We Feel Tired After Every Meal?
Natty or Juice – 5 Ways to Tell...
How Your Sex Life Changes When You’re 50...
How to Bring Sex Back in a Sexless...
5 Reasons Why It’s Harder to Lose Weight...
Here’s Why You Shouldn’t Store Supplements for a...
Is UltraCore Supplements Ultra Garcinia the Weight Loss...
Home » 3 Drugs That Cause Retarded Ejaculation
Sex

3 Drugs That Cause Retarded Ejaculation

If you’re having problems with delayed ejaculation, your sexual satisfaction will suffer. You can develop sexual performance anxiety because of recurring delayed ejaculation and it can even cause a strain in your relationship. But what will you do if it’s the medication that you’re taking that’s causing the problem?

It’s a widely known fact that certain medications have adverse sexual effects. There are drugs that induce erectile dysfunction and then there are those that cause delayed ejaculation.

Also referred to as alpha-adrenergic blocking agents or simply alpha blockers, these drugs are notorious for their various adverse effects on your sexual health. Alpha blockers like tamsulosin and alfuzosin are typically prescribed for LUTS or lower urinary tract symptoms caused by BPH or benign prostatic hyperplasia.

An enlargement of the prostate, by itself, can already cause erectile dysfunction and ejaculatory problems. If the medication you’re taking for BPH also causes adverse sexual effects, you can end up saying goodbye to a pleasurable sex life.

Alpha blockers tend to affect the receptors found in your prostate urethra, bladder neck, vas deferens, and seminal vesicles. All these organs are directly involved in your sexual functions. Thus, anything that impairs the functions of these organs can lead to sexual problems.

Among the many types of alpha blockers, tamsulosin, silodosin, and alfuzosin are the ones that are associated with a high prevalence of delayed ejaculation and other ejaculatory disorders.

The results of the study showed that among the men with premature ejaculation who were treated with silodosin, almost 86% were successfully treated. On the other hand, the success rate for tamsulosin was only 70%, 67% for doxazosin, 52% for terazosin, and 46% for alfuzosin.

This can cause fertility problems for some since there’s lesser sperm coming out of the penis. Studies have shown that the prevalence of retrograde ejaculation in patients treated with silodosin ranges from 22% to 28%, with many of these men experiencing dry ejaculation.

This means that when they climaxed, absolutely no semen gushed out of their penis. In cases like these, retrograde ejaculation can cause infertility. Tamsulosin and alfuzosin are also associated with reduced ejaculate volume.

BPH is believed to be the result of excessive dihydrotestosterone DHT activity. That’s because prostate development and growth are the part of the functions of DHT. Since testosterone is transformed into DHT through the actions of the enzyme 5alpha-reductase, blocking the enzyme can help prevent high DHT levels.

That’s basically what 5alpha-reductase inhibitors or DHT blockers do. In short, these drugs suppress the conversion of testosterone into DHT so that there won’t be as much DHT making your prostate grow.

Dutasteride, another 5alpha-reductase inhibitor, is also associated with ejaculatory disorders, reduced libido, and erectile dysfunction. A 2012 study even showed that the incidence of adverse sexual effects associated with dutasteride was even higher than that of finasteride.

Scientific studies have long established the fact that SSRIs cause sexual dysfunction. Prescribed for the treatment of depression, SSRIs are known to cause erectile dysfunction, delayed ejaculation, and anorgasmia. 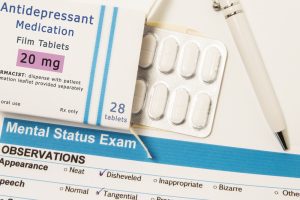 A pilot study conducted back in 1997 showed that treatment with SSRI resulted in delayed orgasm, reduced orgasm satisfaction, and impaired overall sexual functioning. Among the many types of SSRIs, paroxetine is believed to cause more delayed ejaculation and erectile dysfunction than sertraline, fluoxetine, or fluvoxamine.

The problem with SSRI-induced sexual dysfunction is that the issue continues to persist even after the medication has been stopped. The symptoms of post-SSRI sexual dysfunction include weak or less pleasurable orgasms, genital anesthesia resulting in delayed orgasm, erectile dysfunction, and reduced libido.

In many cases, sexual function goes back to normal once the medication has been stopped. However, there are also many instances wherein sexual dysfunction persists even after the patient is no longer taking the medication that’s causing the sexual problem.

For instance, in a study involving men who were treated with dutasteride for BPH, the researchers found that it took 6 months after the medication was stopped before the men’s libido and orgasmic function were restored to normal.

What’s even worse is that even after a year, the men’s erectile function were still significantly reduced. This simply means that they were still suffering from erectile dysfunction even when it’s already been a year since they stopped taking dutasteride.

If you happen to be in a situation like this, you may want to try alternative ways of restoring your sexual function instead of just waiting for the side effects of your medication to go away.

These herbal ingredients are known not only for their potent aphrodisiac effects but also for boosting your erectile function. What’s even better is that it can even benefit your fertility since tongkat ali, maca, and Tribulus terrestris are all known to promote sperm production and increase sperm motility.

Should I Actually Be Eating More Fat?