Popular
Should you buy Male UltraCore? – Male UltraCore...
10 Edible Aphrodisiacs and the Science Behind Them
5 Vitamin D-Rich Foods You Should Be Eating...
Why Do We Feel Tired After Every Meal?
Natty or Juice – 5 Ways to Tell...
How Your Sex Life Changes When You’re 50...
How to Bring Sex Back in a Sexless...
5 Reasons Why It’s Harder to Lose Weight...
Here’s Why You Shouldn’t Store Supplements for a...
Is UltraCore Supplements Ultra Garcinia the Weight Loss...
Home » 7 Things Men Should Never Say on a First Date
Sex

7 Things Men Should Never Say on a First Date

First dates can be rife with awkward moments and full of uncomfortable silences. Especially if you find yourself blurting out the wrong thing. Getting your girl from the first date into your arms can be a struggle if you can’t help but say the wrong thing. The problem with miscommunication is that often you don’t know what the wrong thing is. While some people may consider brashness and honesty as forms of authenticity, some people may seem them as rude and obnoxious. However, there are a few things that should be outrightly avoided on a first date. Here are some clues.

1. Don’t mention that she looks nervous 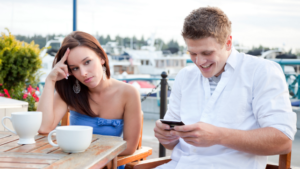 If she seems nervous, bringing it up will do one of two things. It will either make her feel like she’s nervous when she may not be, or it will make her feel like you think she should be nervous. In the first instance, you can set her over the edge, making her embarrassed, causing her to clam up. Alternatively, if it’s the second option, she could just end up thinking you were arrogant.

When you go to tell a funny anecdote, first consider if it contains your ex-girlfriend; if so, steer clear. While it may seem like an innocent story, it will make her feel slightly jealous and leave her wondering if you still have a thing for you ex-girlfriend.

3. Don’t bring up past dates

In the same breath, a string of past dates will make her feel like she has something to worry about. It might also show that you just like to date girls to have sex with them. In general, keep a wide buffer around past lovers.

4. Don’t rush into bringing up the future

It can be overwhelming for you to presume there may be a future between you two. In fact, even bringing up your future wants and needs can be a little overpowering. If you start telling her that you want 4 kids, all boys, 2 dogs, a house in the country etc, she is going to feel like she has to choose right now if that’s what she wants or not. That kind of pressure can spoil the first date.

Political discussions usually end in arguments. You might find her attractive in every way and then lose your cool because she doesn’t believe exactly the same as you do. It’s usually best to avoid in-depth political discussions and stick to the lighter side of getting to know each other.

Some guys have a terrible habit of slipping sexual innuendos into their speech in a moment of sexual tension. Alternatively, they consider brashness to be a form of sexual invitation. Neither of these things are sexy. Instead of making women look forward to the possible sexual element, it makes them feel pressured.

7. Don’t mention the food she eats

In a world where women are constantly judged on their bodies, the last thing they need to hear is you comment on their appetite or choice of food. Commenting on this will only make them feel self-conscious.

Be aware that women spend their whole first date analyzing their chosen man. That means that by the time they get to the bedroom, they’re pretty self-confident. It will give you a boost of energy, stimulate your libido, increase your stamina, and pump up your erection!

5 Scientific Studies with Facts To Help You Rest