Popular
Should you buy Male UltraCore? – Male UltraCore...
10 Edible Aphrodisiacs and the Science Behind Them
5 Vitamin D-Rich Foods You Should Be Eating...
Why Do We Feel Tired After Every Meal?
Natty or Juice – 5 Ways to Tell...
How Your Sex Life Changes When You’re 50...
How to Bring Sex Back in a Sexless...
5 Reasons Why It’s Harder to Lose Weight...
Here’s Why You Shouldn’t Store Supplements for a...
Is UltraCore Supplements Ultra Garcinia the Weight Loss...
Home » Benefits of Yoga
Fitness

You don’t have to be a guru or spiritual to do yoga. Yoga is accessible for all population of people. You don’t even have to pay for yoga classes, pushing the flexibility limits of your muscles with a group of strangers. Yoga lessons are available on most social media and fitness apps as well.

Need a few more reasons to go out, buy a yoga mat and implement yoga routines into your lifestyle? Yoga has also been associated with numerous benefits to our health.

Yoga can have a positive influence on your sex life. Sex is exciting for all members involved. However, it is possible to get too excited. Being too excited for sex can cause you to ejaculate prematurely which can hinder the pleasure of the sexual act or bring it to a halt altogether. Doing yoga can solve that problem for you.

Through clearing your mind and deep breathing, yoga helps you to relax by disconnecting yourself from reality and helping you to focus on your mindfulness. In 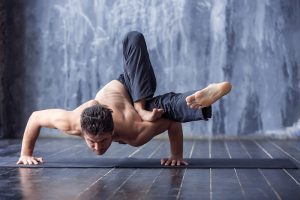 addition to making you relaxed, yoga can have a positive effect on your work practices and productivity. A research article published by the Centers for Disease Control and Prevention explored the relationship between doing yoga with work productivity and behavior. This research study comprised of the National Health Interview Surveys from 2002, 2007 and 2012 that collected data of their progress over 12 months of doing yoga among employees. The research revealed that doing yoga helped employees to cope with stress and helped them to manage their emotions. Additionally, yoga made employees more productive and enhanced their memory, focus, and creativity.

So, if you’re ever at work feeling distracted or even unproductive, try doing breathing exercises and meditating for a few minutes to boost your productivity.

Yoga can boost your immune system as well. The examination of how yoga affects the immune system was examined in a research study published by the International Journal of Yoga. The research study looked at the effects of yoga on sixty medicine students. The participants were split into 2 control groups, 30 students who implemented yoga in their daily routines for 12 weeks and the other 35 did not. The research showed that yoga affected the levels of cytokines in the body. Cytokines play a vital role in the body’s immune system by controlling how other cells behave and the maintenance of cells. Therefore, yoga can cause your immune system to be more effective, thus promoting an increase in health and your general wellbeing. It may not have the same immune effects of eating an orange, but it does boost your immune system.

As you stretch yourself into the downward down thinking of all the muscles that you are working, you’re probably not thinking about how yoga affects your brain. Researchers found, in a study published by the Journal of Physical Activity & Health, that yoga has a positive effect on your cognitive performance. The study monitored the yoga exercise of the participants and looked that their cognitive abilities presented after the yoga session which lasted about 150 minutes over the period of a week. In comparison to aerobic exercise, the participants who did yoga saw a spike in their accuracy skills. The researchers concluded this accuracy as a result of yoga enhancing attentional focus and this in and of itself promotes concentration and attention.

As our technological advancements continue to progress, there is less of a demand for manual human labor. Researchers have estimated that 80% of jobs are sedentary and demand little physical exertion. This has had a huge effect on our bodies by placing us at a slightly elevated risk of developing certain conditions. A sedentary lifestyle can also drastically affect your posture and mobility.

In a research study published by the Evidence-Based Complementary and Alternative Medicine journal, researchers examined how yoga can enhance your posture. This study looked at the posture of 20 elderly adults who participated in a beginners and intermediate yoga sessions over a period of 32 weeks. Researchers reported that the yoga sessions enhanced the flexibility and maintenance of important joints within the body such as the knee and hip joints. The improvement of these joints resulted in a 70% increase in creating and establishing a better posture when walking. With the posture of elderly adults increasing on such a high scale only after 32 weeks of yoga sessions, imagine what doing yoga every week can do for you and your posture and mobility?

So, go ahead, take a few yoga sessions and strut your way into a more active lifestyle with a great posture.

In addition to the benefits listed above, one of the most important benefits of yoga is the relaxation you feel after a session. A yoga session is a positive step in relieving stress instead of resolving to use substances, indulging in a bad habit or even making decisions that may be harmful to your health and general wellbeing.

Doing yoga has many benefits, and with implementing a few hours of yoga a day, you can enhance your mental and physical state of being.