Popular
Should you buy Male UltraCore? – Male UltraCore...
10 Edible Aphrodisiacs and the Science Behind Them
5 Vitamin D-Rich Foods You Should Be Eating...
Why Do We Feel Tired After Every Meal?
Natty or Juice – 5 Ways to Tell...
How Your Sex Life Changes When You’re 50...
How to Bring Sex Back in a Sexless...
5 Reasons Why It’s Harder to Lose Weight...
Here’s Why You Shouldn’t Store Supplements for a...
Is UltraCore Supplements Ultra Garcinia the Weight Loss...
Home » Everything You Need to Know About Ice Baths
Health

Everything You Need to Know About Ice Baths

Ice baths have gained popularity in recent years. From marathon runner Paula Radcliffe to champion weightlifter Karyn Marshall to Olympic swimmer Michael Phelps to celebrities like Madonna and even to high school football, ice baths have been part of their journey. Because these champions attributed part of their success to ice baths, more and more athletes, runners, and hardcore trainers immerse themselves in ice baths after a race, a game or an intense workout. Ice baths have also become a part of military training.

What is an ice bath?

An ice bath or called water immersion is the process of immersing yourself in a bath filled with ice after an intense workout. It’s part of a training regimen for the purpose of healing sore muscles, decrease pain and inflammation, and enhance the healing process.

Exposure to cold enables the body to fight the small tears in muscle fibers that caused soreness after a repetitive exercise. Sitting in ice baths constricts the blood and getting out dilates them. This process clears metabolic waste, like lactic acid, after a workout.

People who have used ice baths shared the following benefits they get from taking ice baths:

Ice baths are not only part of the recovery routines that repair the damaged muscle fibers but are also great in strengthening them.

Reduced body temperature takes away the strain from the heart and reduces nervous fatigue. 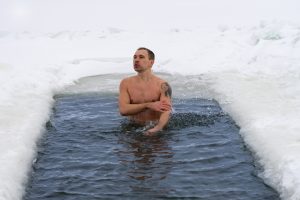 Unlike a cold ice pack that treats only a specific area, ice baths treat a large area of intertwined muscles.

Because ice baths require a comparable degree of tolerance, they can mentally prepare your body for more difficult stresses and stimuli. It increases your willpower to push yourself more.

Ice baths speed up the healing of muscles and joints.

Once your body starts to be comfortable sitting in the cold, you start to enter into a meditative state.  This makes you calmer and able to keep your cool.

Once your body is relaxed, it’s easier for you to enjoy a good sleep.

How to take ice baths

Different people use a different methodology in cold water immersion. Since no one shoe fits all, you can try any method that you feel suits you best.

Some people use booties to protect their feet and use rubber pads around their midsection to keep it warm.

Some say of drinking hot tea to be able to stand the cold.

Some immerse themselves in ice filled baths with water up to their waist. But most recommend getting the best results when the water is up to their chest. There are also others who prefer little to no water at all.

Some say they’re able to tolerate up to 59 degrees Fahrenheit. The water can be challenging but the point is to overcome the challenge.

While others read magazines to pass the time, others focus on their breathing to enter into a meditative state. They focus on the pattern of alternating between long and slow breaths until they feel awake, aware, focused, and energized.

Ice baths should be taken right after a game, a race or an intense workout. Delaying it may affect the result since your body may already be undergoing its natural healing process.

Others say ice baths work best when taken once a week but if you’re an athlete, it’s recommended to submerge yourself after every intense training.

For first timers, 10 to 20 minutes immersion may not be best for you. You need to listen to your body and be aware of what you could only tolerate. If you can go for up to 1 minute only, be fine with it and increase the length of time next session.

You can also follow what physical therapist Nikki Kimball had done when she first tried ice baths. She filled the tub with two to three ice bags of crushed ice then slowly add some cold water that can cover up to her waist while sitting in the tub. She also wore a jacket, a hat, and a bootie before getting in and made herself a cup of hot tea and read magazines to pass the time.

Champion weightlifter Karyn Marshall had ice baths as part of her training. She was submerged in the ice filled tub for 12 minutes on the first day, and 15 minutes on the second while the ice was being added to reach the 55 degrees Fahrenheit temperature. According to her, the first two minutes was challenging but she was told she’ll be able to regain her composure after the first two minutes, which she did.

Ice baths can really be painful but if you’re looking for optimum healing, performance, and energy, the discomfort may be all worth it.

If you have high blood pressure or cardiovascular disease, ice baths may not be good for you because they’re said to cause hypothermia, shock, and sudden cardiac death. You need to ask your doctor when you have health issues before plunging yourself in ice baths.

Though several studies have been conducted to test the effectiveness of ice baths, some health experts say ice baths can prevent muscle-fiber growth and delay muscle regeneration. Ice baths may not work for you if you’re looking for muscle mass.

Ice baths are also found to relieve pain only for the short term.

Because studies on ice bath have contradictory results due to differences in age, fitness level, and methodology of each test, the best way to know whether it works or not is to test it yourself.