Popular
Should you buy Male UltraCore? – Male UltraCore...
10 Edible Aphrodisiacs and the Science Behind Them
5 Vitamin D-Rich Foods You Should Be Eating...
Why Do We Feel Tired After Every Meal?
Natty or Juice – 5 Ways to Tell...
How Your Sex Life Changes When You’re 50...
How to Bring Sex Back in a Sexless...
5 Reasons Why It’s Harder to Lose Weight...
Here’s Why You Shouldn’t Store Supplements for a...
Is UltraCore Supplements Ultra Garcinia the Weight Loss...
Home » How to Introduce Your Partner to Your Friends
Health

How to Introduce Your Partner to Your Friends

Contents show
1 Introducing them to my friends.
2 Don’t throw her in and expect her to be OK with it.
3 Don’t abandon her at any point during the first meeting.
4 Leave early with her.
5 Do not treat her differently when your friends are around.
5.1 I wish you all the best of luck with the advice I’ve given you.

When I start dating someone new, I know I’m instantly going to dread one thing:

Introducing them to my friends.

Then again, if you really think about it, half the battle of introducing your significant other to your friends is all about the way you do the introducing. If you nonchalantly bring them together and think it’s a good idea, chances are the meeting won’t go as smooth as you’d want it to. If you put a lot of pressure on either party when introducing them, chances are the meeting won’t go so great either. All in all, you have to make sure your friends and your girlfriend get along, especially considering they’re two of the most important people in your life.

While planning the meeting, you have to keep in mind that she’s being introduced to a ton of new people that she’s probably never been introduced to in her entire life, which means you have to ease her in. I’d say, in my personal experience as a girl, there are certain instances and situations that make me uncomfortable when meeting my boyfriend’s friends for the first time. So, with my expert advice, I hope you’ll be able to do the introducing without making your girlfriend feel out of place. Here goes!

Don’t throw her in and expect her to be OK with it.

My explanation of this recommendation may not make sense at first, but hear me out entirely before you jump to your own conclusions.

First impressions, whether we want to believe it or not, matter a lot. And when it comes to our friends and our girlfriend, we want to make sure that both parties (specifically our girlfriend) make a good first impression. With that being said, do not introduce your girl to your friends at a big, overwhelming event. That’s like throwing her into the snake pit and expecting her to come out alive.

For instance, do not bring your girl to meet all of your friends at the annual barbeque you guys throw. Also, do not make her meet them at a wedding, or any event similar to that of a party. In addition, don’t bring her on vacation and ask her to meet a bunch of people for the first time; Your first vacation should be alone, anyways. 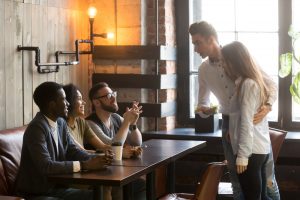 If you do introduce your friends and your girlfriend at such an event, the pressure will most likely get to her, and she won’t get to know anyone. What’s worse is that she’ll feel extremely uncomfortable next time she goes to hang out with them, too. Instead, try introducing your partner to a few friends at a time, that way she’ll feel relaxed and welcomed.

Don’t abandon her at any point during the first meeting.

Don’t abandon her during the first meeting, or any meeting, until she feels comfortable enough around your friends where she can call them her own friends. This doesn’t mean you have to follow her around every second like you’re her parent, though. This does mean you should not leave her alone at a party where she only knows two people and you know more than 90% of the attendees.

Instead of being up her ass, and instead of leaving her completely alone, just check in with her from time to time. Ask her if she needs anything a few times throughout the night.

In addition to these tips, make sure you don’t ever leave her alone with creepy people at a party or outing. And, if you do see that she’s left in an uncomfortable situation, get your ass over there and help her out of it.

Leave early with her.

If it’s the first time your girlfriend is meeting your friends, you’re going to want to leave early so that she doesn’t feel trapped. Meeting new people is overwhelming enough. And, depending on what the two of you are doing with your friends will depend on how early to leave. For example, if you’re going to your guy friend’s house and you plan to play video games for a few hours, don’t make her sit through the torture for more than a few hours (unless she loves video games). Leave early so she has a chance to meet them but also has a chance to get away from the games.

When it comes to events, leave early with her if it’s her first time meeting them, too. Meeting new people takes a lot of energy out of us girls, so don’t overexert it, please. And, most of us girls tend not to tell our significant other when we’re ready to leave, mainly because we feel rude doing so. So, if you see us getting antsy and bored, take the hint and get us out of there.

Do not treat her differently when your friends are around. 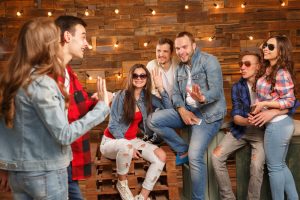 If by chance you do have to act differently when your friends are around, I’m going to have to break it to you: Either your friends suck, your girlfriend sucks, or you suck. Which in turn means you need to get rid of the one that sucks (and let’s hope it’s not you, because that would suck).

For example, do not tell embarrassing stories about her, that’s not right. That will automatically put a red flag up causing her to leave you shortly after.

I wish you all the best of luck with the advice I’ve given you.

Tips on How to Prevent Painful Sex

9 Tips on How to Stop Smoking