Popular
Should you buy Male UltraCore? – Male UltraCore...
10 Edible Aphrodisiacs and the Science Behind Them
5 Vitamin D-Rich Foods You Should Be Eating...
Why Do We Feel Tired After Every Meal?
Natty or Juice – 5 Ways to Tell...
How Your Sex Life Changes When You’re 50...
How to Bring Sex Back in a Sexless...
5 Reasons Why It’s Harder to Lose Weight...
Here’s Why You Shouldn’t Store Supplements for a...
Is UltraCore Supplements Ultra Garcinia the Weight Loss...
Home » How to Know When Something Has Gone Wrong With Your Bladder
Health

How to Know When Something Has Gone Wrong With Your Bladder

Contents show
1 So, what are the signs that you might be having some problems with your bladder?
2 The first is the most obvious — so, let’s get it out of the way. There’s blood in your urine.
3 Next is another change in the color in your urine, but a little less worrisome.
4 Let’s go back to the look of your urine.
4.1 If you’re seeing these kinds of signs, it’s important to not just merely self-diagnose.

You probably don’t give your bladder more than a passing thought through most of your day. It’s only when it’s full, when you feel that pressure building, that you know that it needs to be emptied and soon, that it really enters the forefront of your mind. And when it does, it’s pretty much all you can think about. So, you probably don’t give too much thought to your urinary tract and system’s regular health. But it’s important to know the signs of when things might be out of whack — when you might be sick, because when things go bad — it can be deadly.

First, don’t freak out. You’re probably thinking about all of your trips to the bathroom recently. Is the frequency too much? Too little? Well, each person is different. There’s no specific number that I’m going to be able to give you here that is going to apply to you and every other reader of this article. But a good average is that you’ll evacuate the fluid from your bladder about six to eight times per day. And then about once per night. A little more or a little less is not a problem, just pay attention to your fluid intake. Have you been drinking more water? Well, that would explain that sudden increase. Most people are more likely to take note of an increase in times they urinate. That goes back to your bladder not really being on your mind all of the time. But a drop in frequency can also be a signal.

So, what are the signs that you might be having some problems with your bladder?

The first is the most obvious — so, let’s get it out of the way. There’s blood in your urine. 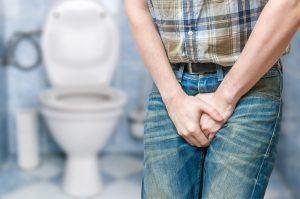 This is a warning sign. If you’re seeing blood in your toilet bowl, you should see a doctor. This can be a sign of a variety of health issues, including inflammation in the bladder to kidney stones to urinary tract infections. Kidney stones are no joke. The pain from kidney stones can be so intense that pain scales typically have it near giving birth. It’s probably the closest you’ll ever get to that kind of experience. It’s not a blessing. And urinary tract infections can have long term negative health effects if not treated timely and properly. You want to get anything that could be putting blood in your urine checked out and taken care of as soon as possible.

Next is another change in the color in your urine, but a little less worrisome.

What if your urine is a little darker than usual? Think back on your fluid intake today, because the most common cause of such a change is dehydration. Time to start drinking more water. Not just any fluids will do. Coffee and soft drinks can negatively impact your hydration levels, so if you’re seeing darker urine, stay away from those. The eight glasses of water thing isn’t right for everyone, but it’s a good rule to start with if you’re looking to increase your water intake generally. This kind of problem is also usually associated with less trips to the bathroom. That makes sense, because you don’t have as much fluid to get rid of. But, if you see a sudden increase in trips to the bathroom when you suddenly start to increase the amount of water you’re drinking. Take note, but don’t worry. The two are obviously connected.

However, an unreasonable increase in the number of trips to the bathroom and an increase in the times that you’re feeling some pressure in your bladder is a potential sign that maybe things are going awry in there.

Of course, as stated before, everyone’s bladder is different. Just having to go to the bathroom more often than your friends is not necessarily a negative sign. What you need to watch out for is an increase in frequency compared to your own normal habits that can not be explained by a sudden intake in the consumption of fluids because you’re trying to take care of that darker urine problem that we talked about earlier. An overactive bladder can be especially troublesome if you’re getting older, say over the age of 60, since that can be a sign of an enlarging or swollen prostate. An enlarging prostate is just a part of getting older but it can also be a sign of prostate cancer, the most common form of cancer in men, and something to definitely monitor as you get older.

Let’s go back to the look of your urine.

It’s worth seeing a medical professional if you’re noticing that it’s getting cloudy. A single bout of cloudy urine is not necessarily a bad thing and could just have something to do with what you ate, but frequent cloudy urine, especially if its associated with a pungent odor, or it hurts or burns when you pee, could be a bad sign. This can be another sign of an infection to your bladder or somewhere else in your urinary system, even down to your urethra. Make sure that you seek the advice of a medical professional to get it under control. Infections in that area can have negative effects on your sex life.

If you’re seeing these kinds of signs, it’s important to not just merely self-diagnose. 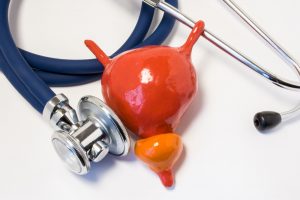 You should go to a doctor and tell them about your symptoms. They’re also likely to ask you for a sample. They’re the ones who can properly diagnose you if something has gone wrong with your bladder.

Your bladder health isn’t something you should ignore only until things are going wrong though. You should make sure to take care of it. There are some easy steps you can take to keep your bladder heathy. Drink plenty of fluids and be more active during the day. If you have a desk job, make sure you get up and move around more often to trigger the pressure that you have to pee. Drink more cranberry juice. It’s known to boost bladder health. As is increasing eating yogurt and garlic.